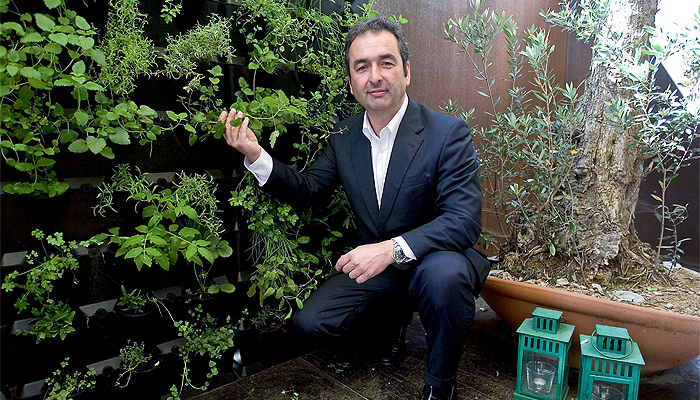 It’s not easy to write about Minigarden’s story in just one post because its development didn’t happen overnight and took the help of many people, however, I’ll tell it how I experienced it. I believe you’ll find it interesting to learn how we finally achieved this brilliant, new way of planting that is set to revolutionise the way we look at urban gardening. At a first glance, Minigarden may look like just another flower pot, still a beautiful one, however, it hides a great deal of wisdom. It’s simplicity is deceiving: thought not in an obvious way, Minigarden comprises an innovative system thought to ensure the successful growth and maintaining of plants.

The seed that started vertical planting

It all started with my father, Manuel Maria Rodrigues, an innate entrepreneurial with experience in almost all industry groups (agriculture, industry, commerce and services). A few years agor, he began testing and designing a new planting system: a small seed of what Minigarden would become in 2007. Its genesis sprouted from a simple need — my father’s will of keeping an active life during retirement. He carefully thought, day in day out, about how he wanted to spend this stage of his life. Finally, he decided to share with his grandchildren the joy of planting strawberries. He built many vertical flower pots, which ended up being the push for a project that would soar to great heights. The strawberries came in abundance, as well as the mockups, which were regularly changed to ensure a successful picking spree.

To be more precise, Minigarden started because of the agricultural background of our company Quizcamp, which was founded in 2005 with a 110 hectare property in Alentejo, one of the most underprivileged areas of Europe. Our original idea was to produce and sell pre-cooked meals, which suited the healthy mediterranean diet, and other high quality food products. For its success, it would be essential to pick the vegetables, leguminous, aromatic plants, and fruits at the right time to preserve the flavour and scent that we all love. In other words, the proximity of the plantation was absolutely important.

On top of that, the products’ quality was intimately connected to the agricultural production — transgenic farming and pesticides has horrible consequences from which we want to stay away. We believe technology can be of great use to both mankind and the environment, which is why we chose integrated farming as our main approach. Integrated farming is based on natural resources and regulation mechanisms that don’t harm the environment. In just two words, sustainable farming. Lastly, it was important to keep the costs down, mainly in manpower. This was the only way to offer competitive prices.

For these reasons, we decided to focus on developing a new planting system with increased productivity and better quality results. This was how my father’s simple vertical flower pot, created to plant strawberries with his grandchildren, developed into a great product: Minigarden Vertical. Through several tests our enthusiasm with vertical farming was validated.

But this was only the beginning of a marvellous adventure.

In the beginning, Minigarden’s goals were a bit different, until we realised how genius the product really is. At that point, we felt obliged to tell the world about it and the idea grew into an international project. 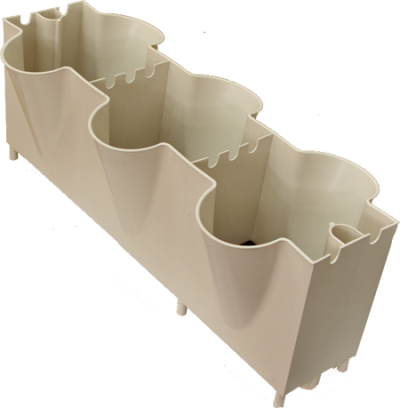 After identifying the need for a new planting system, we invested in mockups, created the different parts, and started the first fieldworks with plantations of peas, beans, aromatic plants, strawberries, and vegetables.

During this exciting time, we had the help of independent professionals from agricultural engineering, like Marlene Coelho, who interned with us and after a year joined the company. She was relentless and a great help during the studies of this vertical planting system. The tests exceeded our expectations and confirmed its incredible potential. We also got to know Minigarden Vertical a lot better and the learning stage led to great improvements.

The familiarity generated made us rethink our strategy. The goal soon became more revolutionary: to introduce this technological, environmental and aesthetic innovation to a greater number of people. Minigarden was to become an educational tool of the world. Thus, from a need came an opportunity to focus on urban gardening.

My parents have always taught me respect for other living beings and I believe that our planet is like heaven. Unfortunately, we have not lived up to these standards but we can still leave a better world to our children. Even though we are at the edge of the cliff, there is still time to start doing things differently. That’s exactly what Minigarden offers: an opportunity for change.

We realised this plant growing system would fit perfectly in urban gardening. This way, we could pass on to people around the world what my parents had taught me about being in synch with nature.

Now our focus is different: to develop our product into a city friendly cultivation system. We redesigned it, keeping all the new features from the previous model. The resulting Minigarden is easier to use and allows more shapes with fewer parts. By the end of 2006, we had achieved the Minigarden Vertical as you know it today. 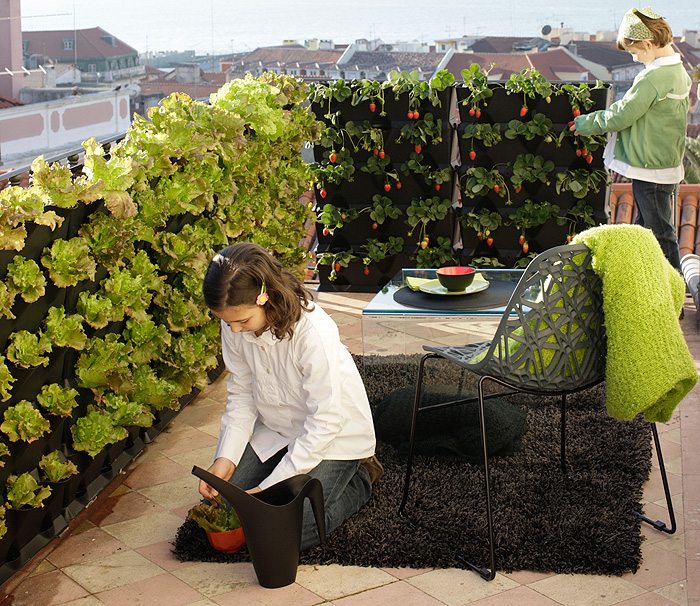 Minigarden offers an innovative way of growing plants in cities. The advantages and possibilities are so many that it’s almost impossible to compile them in one list. However, they are based on the simplicity and modularity of the system. Minigarden’s potential is only limited by each one’s creativity.

Minigarden was indeed our aha moment and its journey has been brilliant, in spite of the less pleasant situations that are bound to happen in any project of this kind. The obstacles we have faced are maybe a synonym of Minigarden’s success, so I’d like to highlight one particular story and its happy ending. 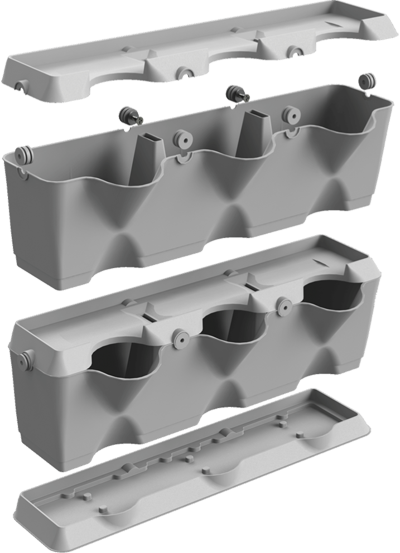 They say imitation is the sincerest form of flattery, however, forgery is not the kind of praise we’re looking for. After investing all our creativity and resources into the creation of Minigarden, we wish for the customers to take full advantage of this great product but we also want to protect it. For this reason, we have registered our invention and got a patent.

Even so, counterfeiting still rears its ugly head: after paying the Chinese government for the registration, we found a fake Minigarden on sale on the website Alibaba.com. After a huge endeavour, we were able to identify and warn the Chinese company responsible for producing and selling the forgery. We asked them to stop their illegal activities, not once but twice, and on the second time through our lawyers. We never got any reply and the dialogue soon became a monologue. The fake product started being sold in Europe and Australia but it was quickly withdrawn from the shelves as soon as we’d let them know it was a forgery. Nevertheless, the only way to actually stop this unpleasant situation was by taking legal action. We won the battle and justice was restored.

We believe, without a doubt, in the excellence and geniality of the product we’ve created, however, sometimes we need to recall amazing stories to build up some strength. There are many positive moments in the history of Minigarden but there is one in particular that always puts a smile on my face. It was the biggest compliment I have ever got for Minigarden and I go back to it in the most difficult times.

In 2008, we were in Tokyo, at GARDEX, which is the biggest gardening fair in Japan. The fair went on for three days and the number of visits to our stand was, as usual, quite high — a sign of the public’s interest in the product. On the first day, during the afternoon, a landscape architect, who could hardly speak any English, showed up at our stand. 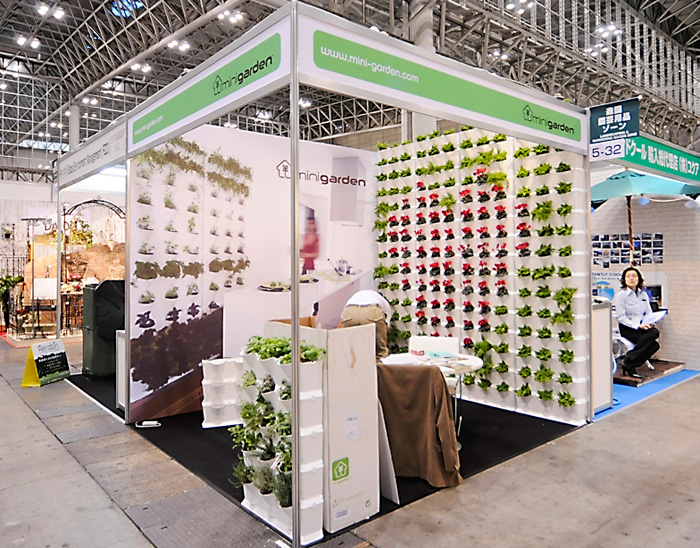 With the help of a translator, I told her about Minigarden and we started a really long and interesting conversation about it, which was fuelled by her relevant questions. She showed a profound understanding about Minigarden’s unique features and ended our talk with a highly complimentary speech about our product. The harmony during our conversation was palpable. The next day, she came back with her husband who understood English and was very curious to find out more about the brilliant product his wife had told him about. After introducing Minigarden to him, he handed me a letter written by his wife about our plant growing system. Written in perfect English, the letter was incredible because it highlighted all que great qualities of Minigarden in a touching way.

What moved me the most was the way she described and imagined Minigarden’s journey, since its creation up until that moment — just as I did now in a more realistic and methodic way.